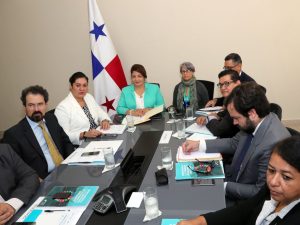 The Vice Minister in charge of Multilateral Affairs and Cooperation, Guadalupe Rudy, thanking the valuable contribution of participating institutions, stressed that the 2030 Global Development Agenda is the framework of this meeting and workshop, a space in which the SEGIB seeks to favor the implementation of the SDGs in the region, which will make the Twenty-Sixth (XXVI) Ibero-American Summit of Heads of State and Government next November in La Antigua, Guatemala, to be held under the slogan “An Ibero-America prosperous, inclusive and sustainable “.

He also noted that Panama was among the first countries that formally adopted the call made by the international community to welcome the SDGs as a guide to overcome poverty, protect the planet and ensure that all people enjoy peace and prosperity.

The meeting took place from September 13 to 14. On the first day, the “ODS and Ibero-America” â€‹â€‹report was presented to key actors in international cooperation. A workshop was also held in which the participants identified how the SDGs impact the work they do and how their work contributes to them, in which the international cooperation offices of national institutions and the Embassies of Spain, the Dominican Republic, El Salvador and International organizations; in addition to the Responsible for Cooperation of Guatemala and Representative of the Pro Tempore Secretariat of the Ibero-American Summit and the Ministry of Foreign Affairs of Mexico. The United Nations Development Program (UNDP) was responsible for conducting the training workshops on the implementation of the SDGs in the Ibero-American context.

Two days before the ODS Workshop, a coordination meeting was held between SEGIB and national institutions that participate in programs and initiatives (PIPAS) such as the Ministry of Foreign Affairs with the Diplomatic Archives Network Program and the Ibero-American Program for the Strengthening of South-South Cooperation, led by the Director General of Cooperation, Selina Baños; the Transit and Land Transportation Authority, who will be part of the Road Safety Program that will be approved at the Meeting of Chancellors prior to the Summit; the General Directorate of Administrative Career, who lead the Governance Initiative, the National Library and the Ministry of Education with the Iber Libraries Program, the Ministry of Health with the Human Milk Bank Program, the National Secretariat for Science, Technology and Innovation, through the Program of Science and Technology for Development, the National Archives with the Iber Files Program, the National Institute of Culture with the programs Iber Escena, Iber Músicas and Iber Orquestas Juveniles; and the Educational Television Program led by the State Radio and Television System.