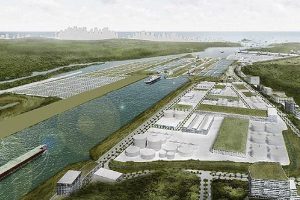 The Panama Canal Authority (ACP) completely reformed its business structure with four new areas to be developed on the banks of the road. It is an ambitious plan to take advantage of expanding the route.

There are four axes initial shape: the West container port in Corozal; a port for vehicle carriers; a logistics park in thousand 200 hectares; and liquefied natural gas terminal in Farfán.

Among these projects, the port of Corozal is the most advanced, because it has all studies, in addition to the approval of the board of the ACP and the bidding process. Although there have filed 11 lawsuits to stop the work.

The company that wins the concession to operate the port should invest about one billion dollars in the construction of the terminal.

It is estimated that the logistics park thousand 700 million dollars for opening and road construction, electricity service and treatment plants wastewater are required. This is a huge industrial city, according to projections of the ACP. lands that were previously shooting ranges of the Southern Command and then cleaned up with the expansion of the Interoceanic Canal to deposit excavated material will be used.

The administrator of the ACP, Jorge Luis Quijano, said the consortium or company that earns Corozal tender could generate $ 25 million in revenue as annual fee, not counting what the state pays for container movement. In addition, it is anticipated that about 2 thousand 300 jobs occur during construction and 300 thousand during the operation.

After the opening of the third set of locks on 26 June, the administration of the Panama Canal Authority (ACP) decided to diversify the business portfolio that had been studying for four years.

It is nine projects related to maritime and logistics industry looking to get the Canal increased productivity through the development of complementary activities with the private sector.

Of the nine axes displayed, administration of the waterway has decided to promote four initial shape: the West container port in Corozal; a port for vehicle carriers; a logistics park; and a liquefied natural gas (LNG) Farfan.

With the LNG terminal, the ACP would cover the demand expressed by employers interested in having a supplier in the country.

Meanwhile, the ro-ro terminal for vehicle carriers is proposed to be developed parallel to Canal navigation channel, and already has the demand analysis studies and feasibility. It is pending the approval of the board of the ACP.

The project would take a year to build and develop 40 hectares. The logistics park will be located in areas that were contaminated with explosives used for practice by the Southern Command, during their presence in Panama, and were cleaned following the expansion of the Canal. It aims to develop a multipurpose terminal, create a transshipment hub, a platform with added value and industrialization.

The investment cost of the infrastructure for the logistics park is estimated at 700 thousand million dollars, including the opening and construction of roads, electricity service and treatment plants wastewater. It also studies create a photovoltaic generation plant to supply energy development that would occur in the logistics park.